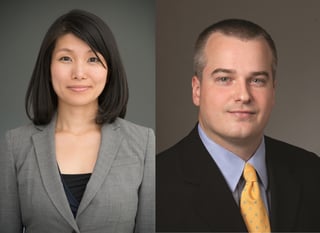 According to the BPCIA framework set forth in Section 262(l), potential patent disputes between the RPS and biosimilar applicant (“BA”) are resolved through a procedure called the “patent dance,” wherein the BA and RPS exchange lists of potentially relevant patents in an attempt to agree upon those that should be litigated.  As part of this statutory scheme, the BA is required to provide notice of any intent to commercially market its biosimilar product pursuant to paragraph (8)(A), which states:

Given its importance to the potential timing of a biosimilar launch, this provision has been the subject of two recent Federal Circuit decisions.

The first case, Amgen v. Sandoz, involved Amgen’s Neupogen® product, which it has been marketing since 1991.  In May 2014, Sandoz filed an aBLA seeking to market its biosimilar version (Zarxio®), but opted not to follow the “patent dance” and did not disclose its aBLA to Amgen.  On July 7, 2014, Sandoz received notification of acceptance for review from the FDA and provided an “operative notice” of commercial marketing to Amgen, which Sandoz expected to occur in 2015.[3]  Amgen thereafter sued Sandoz, arguing, among other things, that Sandoz “violated the BPCIA by failing to disclose the required information under § 262(l)(2)(A) and by giving a premature, ineffective notice of commercial marketing under § 262(l)(8)(A) before FDA approval of its biosimilar product.”[4]  The district court ruled that (1) the patent dance is optional and (2) a BA may give notice of commercial marketing before FDA approval.  On appeal, the Federal Circuit agreed that the patent dance is optional, yet ruled that an applicant can provide an effective 180-day notice under § 262(l)(8)(A) only after FDA approval.[5]  The Federal Circuit explained that requiring such notice “allows the RPS to effectively determine whether, and on which patents, to seek a preliminary injunction from the court,” and is consistent with the statutory requirement that the BA be “licensed” (i.e., FDA-approved) at the time notice is provided.[6]

Last year, in another case involving Amgen as the RPS, Apotex similarly provided a notice of commercial marketing with respect to its biosimilar version of Neulasta® before receiving FDA approval.  Unlike Sandoz, however, Apotex initiated the patent dance and exchanged patent lists and contentions with Amgen. The district court, based on Amgen v. Sandoz, granted a preliminary injunction preventing any launch until 180 days after FDA approval.  On appeal, Apotex argued that it should not be bound by Amgen v. Sandoz given its compliance with the patent dance.  The Federal Circuit disagreed, explaining that the 180-day post-approval period was mandatory and enforceable by an injunction irrespective of whether a biosimilar applicant chooses to participate in the patent dance.

In both cases, petitions for certiorari were submitted in early 2016.  While the Amgen v. Apotex petition was denied, it was granted in Amgen v. Sandoz.  In granting certiorari, the Supreme Court appeared to be influenced by the Solicitor General, who disagreed with the Federal Circuit and argued that (1) the BPCIA provides no express or implied private right of action to enforce § 262(l)(8)(A) and (2) the word “licensed” in that statutory provision does not support any requirement that the BA have FDA approval when providing a notice of commercial marketing.[8] In February, Sandoz filed a brief arguing, inter alia, that:  (1) the statute should be interpreted to allow the 180-day notice to be filed before FDA approval; (2) the Federal Circuit’s decision invented an extra-statutory right of action to “enforce” the notice of commercial marketing, which creates an improper six-month market delay; and (3) the Federal Circuit’s ruling disrupts the careful balance struck by Congress in providing a RPS with an additional 180-day injunction beyond that statutory period.[9] As of March, nine amicus briefs were filed in support of Sandoz’s position and five amicus briefs were filed in support of Amgen’s position.

Impact of a Supreme Court Decision

The Supreme Court’s decision will not only clarify the required time for a 180-day commercial notice, but will likely also provide significant guidance regarding the balance between innovation and competition achieved by the BPCIA.  Oral argument is currently scheduled for April 26, 2017.  We will follow up and report on the Supreme Court’s decision, as well as the implications of that decision, once it is provided.

[3] Although Sandoz ultimately gave notice of commercial marketing to Amgen on the date of FDA approval, the issue presented was whether the notice provided before the FDA approval was effective.