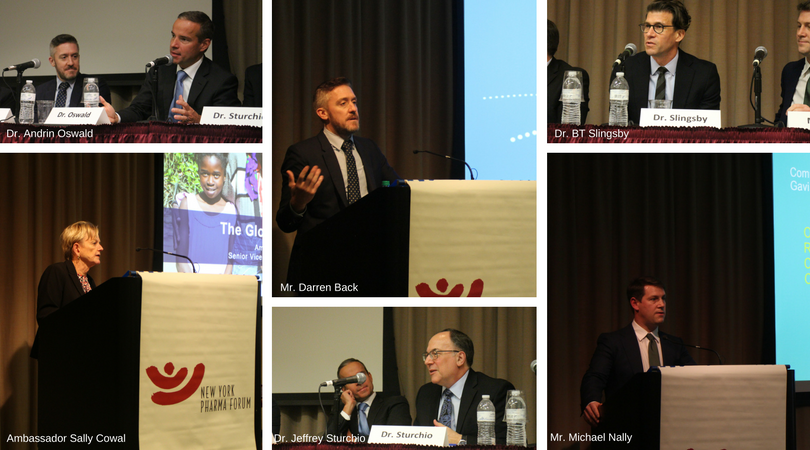 To open the symposium, Dr. Sturchio took a moment to commemorate World AIDS Day, and the progress that has been made in both the development and distribution of antiretrovirals, which has changed an AIDS diagnosis from a death sentence, into a chronic disease to be managed. Looking more broadly at other global disease targets, he noted, “Malaria deaths declined by 60% between 2000 and 2015, and the prevalence of 15 neglected tropical diseases affecting more than 1.6 billion people declined more than 40% between 1990 and 2016 thanks in large measure to the cooperation of endemic countries, donors, and pharmaceutical companies.” These examples, as well as large decreases in maternal mortality and fewer childhood deaths, have worked because of “the evolution of a global health ecosystem that’s mobilized innovation and new alliances to enhance access to medicines and vaccines for populations in need around the world.” Yet while large strides have been made, Dr. Sturchio cautioned that challenges remain, such as the growth of multi-drug resistant TB, and non-communicable diseases like cancers, diabetes, cardiovascular disease, respiratory disease and mental health, which cause 7 out of 10 deaths globally, 80% of which occur in lower and middle-income countries.

Speaking on behalf of the Bill and Melinda Gates Foundation, Dr. Oswald told the audience that they “have the same mission as pharma,” and that their founding principle is that “all lives should have equal value,” adding that the foundation has donated $44.1 billion since 2002 and they are looking to invest towards their goals of providing treatments and cures for HIV, TB, Malaria and other diseases, as well as eradicating polio. Dr. Oswald noted that the foundation relies on partners and alliances to implement its objectives, with the impact of the work depending on the quality, professionalism, and alignment of purpose these partners have with the foundation. “The foundation has a passion and conviction that science and innovation can help to solve many of the problems we haven’t solved yet,” he stated, adding, “We are agnostic as to whether a place is a developing country or a rich country, because the fundamental biology doesn’t really change. The notion that science and a fundamental understanding can help us to address global health problems should guide us, rather than the view that some may have more ability to pay down the road than others.” He concluded by sharing his belief that the foundation can play a unique role in bringing different parties and stakeholders together, but that the private sector has an important role to play in global health, and that while discussions surrounding “fair pricing” should continue to be held, businesses should be allowed to make a profit while doing good.

Taking a broader look at the contributions the private sector has made towards global health, Mr. Nally reiterated the contributions towards AIDS survivability brought about by better drugs and better access, while noting the opportunities for companies to provide leadership with research and product development around unmet medical needs. “We have a dual purpose of finding better cures and better treatments, but also finding a way to make them sustainable into the future. If we don’t, our industry’s sustainability will be in question.” Speaking to Merck’s specific contributions to global health, he highlighted the case of the hepatitis B tech transfer to China in 1989. “Approximately 10% of the Chinese population had chronic hepatitis B, but the partnership has been able to nearly eliminate the disease from China.” Other Merck initiatives work to combat maternal mortality and river blindness, and through a partnership with the Wellcome Trust, develop new vaccine delivery technologies for cholera and rotavirus. Additionally, Mr. Nally highlighted recent vaccine development efforts to combat Ebola, which showed 100% efficacy in early ring studies. Reflecting on the recent Ebola outbreak, Mr. Nally commented that there was, “Huge public health need, certain capability within industry, and acknowledgement that the path to success was going to require many partners,” adding, “Our Ebola efforts were never going to be a commercial opportunity, but only a few organizations in the world can translate the science and think through how to develop a vaccine.”

In his position as CEO of the Global Health Innovative Technology (GHIT) Fund, Dr. Slingsby explained the unique funding and investment strategies his organization uses to direct resources towards HIV, TB, Malaria and NTD (neglected tropical diseases), noting specifically on vaccines, “If you look at the history of healthcare technology innovation in the world, nothing has had a larger impact than vaccines. There’s no other technology throughout the world that lets us eliminate and completely eradicate an infectious disease.” When GHIT was founded, 1% of FDA-approved new chemical entities were for NTD’s, a fact highlighting the non-profitability of these diseases for pharma companies. The solution, according to Dr. Slingsby, “Are public-private partnerships,” adding “It’s absolutely necessary to involve life-science companies, which are the only companies in the world that can develop a product.” He described GHIT’s unique funding structure, where half of its funding from the Japanese Government, a quarter from the Bill and Melinda Gates Foundation and the Wellcome Trust, and a quarter from pharma companies. The organization then provides grants to companies on an open basis with no strings attached. Dr. Slingsby further explained, “A primary criterion in all of our investments is that it has to be a partnership between a Japanese entity and a non-Japanese entity. Any partnership can apply and to date we’ve provided over 60 investments totaling over $120 million,” adding “We are currently funding 7 clinical trials around the world in therapeutics and vaccines, and funding has gone from 9 partners giving $100 million to 26+ partners committing $350 million.”

Speaking to Pfizer’s social investment strategy, Mr. Back started by saying “Our fundamental belief is that our business strategy is the same as our social strategy. We discover, develop, and bring to market lifesaving medicines and vaccines and work to make them available to people around the world.” Looking at the current business landscape, he noted, “We’re seeing a lot of non-traditional players coming into the space, such as Amazon and the Chan-Zuckerberg Initiative, who are thinking about issues of access differently than traditional philanthropists and trying to solve emerging health challenges by positively disrupting traditional health approaches” Mr. Back continued by explaining that many countries are shifting from managing communicable diseases to managing non-communicable diseases, but that in many countries there is the dual burden of managing both, adding “We’re seeing a move from disease-specific vertical programming in many countries to horizontal programming.” But despite challenges, the way Pfizer reacts is simple he says, “Pfizer leverages the resources we have available to us: Our people, our products, our funding, and uses them to address the most pressing global health challenges around the world. All of this is underpinned by innovation and alliances.” One example of this is Pfizer’s large corporate volunteering program, which began in response to the AIDS crisis, and has grown to the point that over 450 Pfizer colleagues have worked with 40 partners in more than 40 countries around the world. In addition, the Pfizer Foundation provides “Global Health Innovation Grants” to in-country social entrepreneurs who are uniquely equipped to understand local healthcare needs, but need assistance with project scaling and implementation. Mr. Back concluded by noting Pfizer’s ongoing commitment to making its drugs available to those most in need, with one prominent example being the 680 million doses of Zithromax® (azithromycin) it has donated to treat trachoma, the leading cause of infectious blindness.

As the final speaker, Ambassador Cowal started by mentioning the widely disparate experiences of someone diagnosed with cancer in the United States versus in a low income country, noting that someone diagnosed with cancer in New York could go straight to Sloan Kettering and begin an innovative treatment, get a second opinion at Mt. Sinai, and have the full support of friends and family. This contrasts with the likely experience in a low income country, “It would be a late diagnosis, at stage 3 or stage 4, with probability of no immediate treatment and no access to a second opinion,” she said, adding, “Cancer is more stigmatized in Africa than HIV, because there are treatments for HIV, but cancer is a death sentence.” With regard to the global cancer burden, cancer is one out of every six deaths in the world today, and has tremendous global economic impact. “The total economic impact of premature death/disability from cancer worldwide was $895 billion in 2008, 1.5% of the world’s GDP,” she stated, adding, “Cancer, to say nothing of the other NCD’s, is undermining people’s ability to support their families and is reducing their purchasing power.” Despite the scope of the burden, Ambassador Cowal observed, “In the global fight against cancer, there are tremendous opportunities for pharmaceutical companies, because those of us in the nonprofit sector are not going back into our storerooms at the end of the working day and creating some miracle drug. We need the pharma industry to be really innovative.” She concluded by noting that while cancer can seem overwhelming, “We can break it down to things we can do something about: the innovation of pharmaceutical companies, the power of civil society, and partnerships working together. There is a lot of low hanging fruit,” adding, “Where you live shouldn’t determine if you live.”

Prior to the General Assembly, the organization held its annual meeting and elected a new board of directors and officers. John Keller, Ph.D., President and Chief Executive Officer, Shionogi Inc., was re-elected president. Other officers (re)elected were: